Gabor PAPP
Short-toed Eagle Working Group, Hungary
IDing Short-toed Eagles on a species level is quite straightforward, however telling sexes and age groups from each other are other matters and require experience and thorough knowledge of certain features. There have already been at least two papers published in the international literature, which dealt with this topic in details (Javier Blasco-Zumeta & Gerd-Michael Heinze; Campora & Cattaneo, 2005) The aim of this document is to provide field guidance for interested birders and conservationists through the summary of observations and photos taken in Hungary.
Although the Short-toed Eagle is one of the rarest raptor species in Hungary, its exact population figure is unknown due to several factors (e.g. lack of interest from the conservationists’ side, lack of funding, difficult detectability, variation in monitoring data). Nevertheless, we put the number of breeding pairs between 30-50 pairs with a possible decreasing trend.
In order to obtain a better estimate to assess its real regional situation in the future, we need to improve the field data collected by field workers.
Hungary is in a relatively “lucky” situation when it comes to monitoring the species.
Why is it considered as luck?
Apart from a very small and localized breeding population in the Kiskunság Plains all the pairs nest in hilly and mountainous habitat. The majority –not exclusively!- of the oversummering non-breeding individuals in Hungary spend the summer in a few ‘puszta’ areas while the adults breed in the mountains. From what we know so far, the Kiskunság Plains is the only habitat, where the beeding area and the oversummering area overlap. Nevertheless, we observed immature birds in well-known breeding territories several times. To the question, whether those birds hatched there in the previous years or not colour-ringing may bring the answer in the future.
Researches carried out in Western Europe proved (Malafosse, 2014) that the earliest breeding attempts occur in the 4th calendar-year. Lacking any observations either confirming or confuting this fact in Hungary, we suppose that it is applicable to our local population, as well. Based on this, it is evident why it is so important to identify the bird seen correctly. Having identified an immature bird (2nd-3rd cy) properly, one can exclude but at least question the breeding in otherwise suitable or even historical nesting habitat. Experience has shown that the monitoring effort invested in this species is negligible compared to other strictly protected ones which is being complicated by its cautious and skulking habit near the nest.
Age identification:
Three different plumages (juvenile – 2cy – 3cy) and a plumage type (4th cy and older) may be recognized with some exercise if one is aware of the key ID features. For practical purposes IDing sexes is discussed under the section of this latter plumage type. As far as we know, sexing in the field is impossible at any age younger than that. We will also shortly make an attempt to present the spatial and temporal distribution of the different groups in Hungary under the corresponding sections.
Descriptions of the plumages were prepared almost exclusively based on observations and photos taken in Hungary in order to be as much applicable for the local situation as possible.
Juvenile: In Hungary, it is surprisingly hard to observe juvenile birds away from the nesting sites. It can be attributed to that juveniles fledge around mid-Aug. in an average year and they spend a few more weeks with their parents not leaving much time to wander around in Hungary, unlike immatures do. 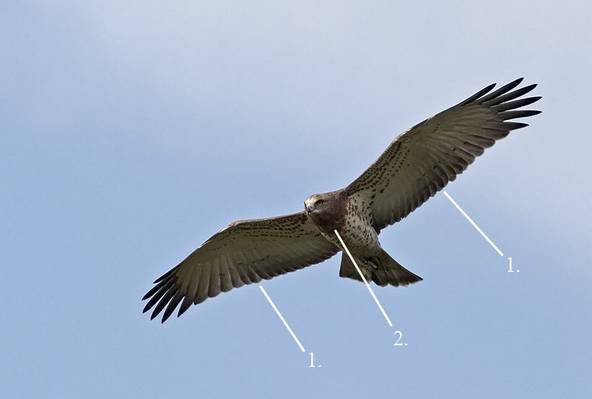 Features of the newly fledged juveniles:
– regularly show weak barring on the flight feathers
– reddish tinge to the brown colouration underneath, which may require good light to be seen
– uniform trailing edge (1.)
– the hood is normally well defined, close to that of an adult female, therefore observation of a lone bird might be deceiving (2.).
2nd calendar-year: Birds of this age group may occur in lowlands, hilly or mountainous country. They regularly show up at their main summering areas (and sometimes near breeding habitats) from May onwards. 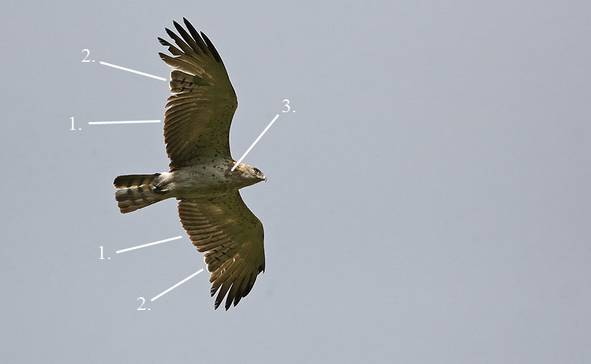 Features of the 2nd cy birds in flight:
– this is the palest age group of all
– unmoulted feathers get washed out (1.)
– moult of the inner primaries starts late spring and continues till the start of the autumn migration leaving usually the outer four primaries unmoulted (P7-10) (2.)
– thickness of the hood varies greatly, however, most of the time it is weaker than that of the juveniles or adults. Newly moulted feathers are darker brown contrasting well with the already pale brown juvenile feathers. The remains of the hood regularly form a ‘necklace’ (3.). 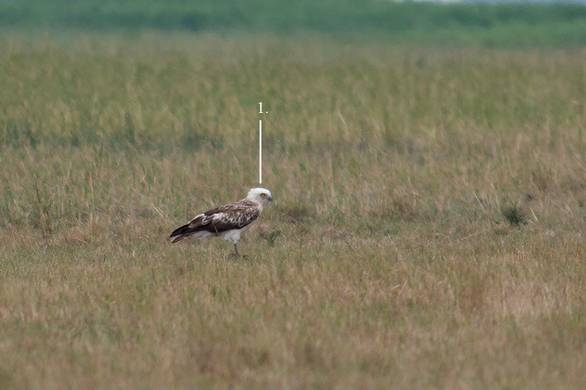 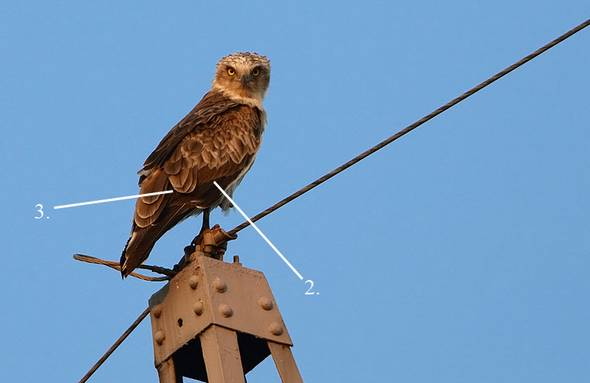 3rd cy: The same applies as discussed in the previous chapter (2nd cy), however, certain observations suggest that these can already pair up with adult birds, although we haven’t found any breeding attempts of such formation. This age groups shows up in its Hungarian summering areas after May, as well. 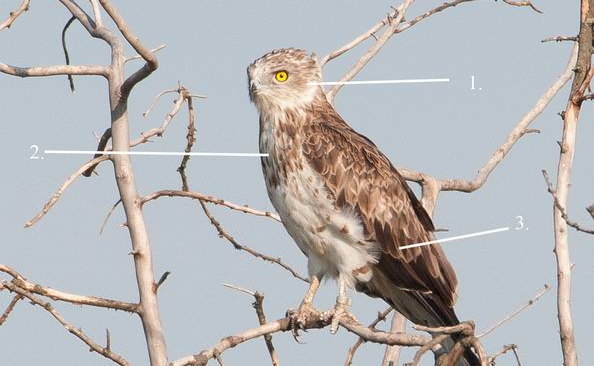 Features of the 3rd cy birds perched:
– head is darker than that of the previous age group, however, it is not that uniformly brown as in case of adults (1.)
– the hood is not well defined yet, rather ‘necklace’-like (2.)
– some inner greater coverts (covering the secondaries) freshly moulted (3.). 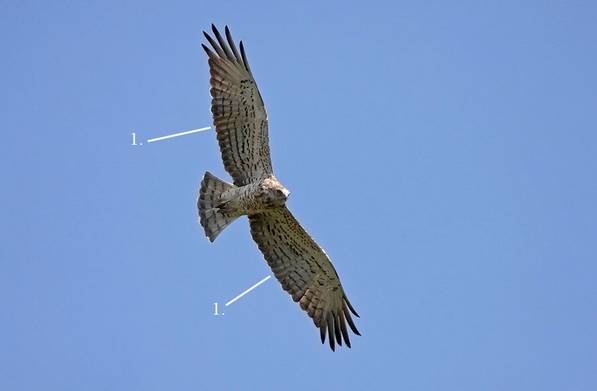 Features of the 3rd cy birds in flight:
– altogether, it reminds of an adult with the dark pattern forming neat rows on coverts and flight feathers, however, usually retain a few juvenile type flight feathers, primarily secondaries (1.).
4th cy and older birds: Since this age group is breeding already, observations of these birds provide invaluable information regarding the population number of the species. Following the first arrival in spring, which usually occurs during the last week of March, any similar aged bird seen basically anywhere in the country is a very good sign of an active territory. Naturally, it has to be kept in mind that until mid-April migrating birds of more northern origin may move through Hungary, however, those fly quite high directly to north most of the time.
In Hungary, the abovementioned period (from last week of March until mid-April) is the best to find active territories due to frequent activity of the pair together. Apart from the situation in the Kiskunság area discussed above, any bird of this age group showing up in lowlands habitat before mid-Aug. suggests failed breeding attempt, while subsequent observations from September on can be attributed to local breeders. They usually stay until mid-September but a few birds may stay until mid-October depending on the weather. Characteristically, adults turn up in the lowland summering habitats mid-July the earliest while the majority only later around August suggesting that even pairs failed early during the breeding-cycle hold out in the territory as observed in Ukraine (Pismennyi pers. comm.).
Features of the 4th cy or older birds:
– probably one of the most important field mark in comparison to the previous plumages is the definitive hood (except juveniles, but those can be identified by other features discussed earlier)
– barring of the flight feathers is uniform, lacking the mixture of adult and immature patterns (one should keep in mind though that every once in a while odd-looking feathers may develop, causing confusion; these feathers also serve as unique individual identifiers).
Sex identification:
The abovementioned literature deals with the sex identification in great depth, therefore we just briefly touch on this subject. Proper sex ID has a greater importance during the initial stage of the breeding cycle (early April through end of May), for example seeing an adult female for prolonged period or both mates together other than just changing each other on the nest quickly in a formerly confirmed, active territory suggests that the bird is alone or the breeding attempt failed. Later, it is normal for both of them to stay away from the nest for hours. 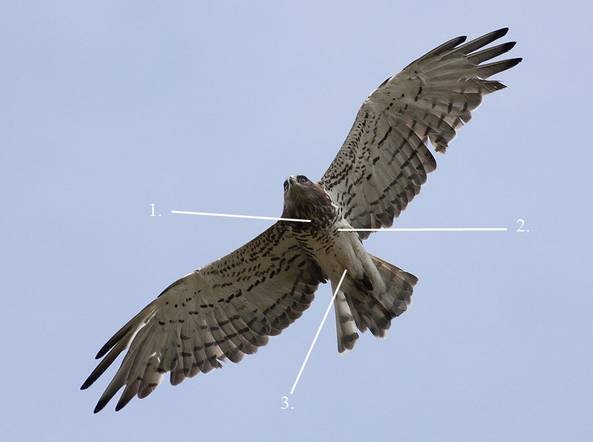 Characteristics of the male:
– in flight, the easiest way to tell from females when seen from underneath. Overall a paler bird, the hood shows whitish vertical stripes (1.), horizontal bars on the body is weaker (2.), and the barring usually only reaches the belly leaving the flank and undertail coverts unmarked (3.). 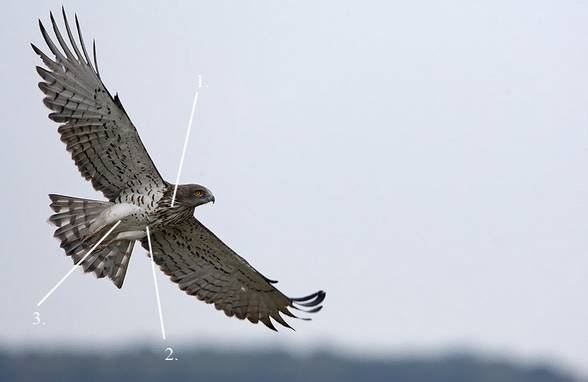 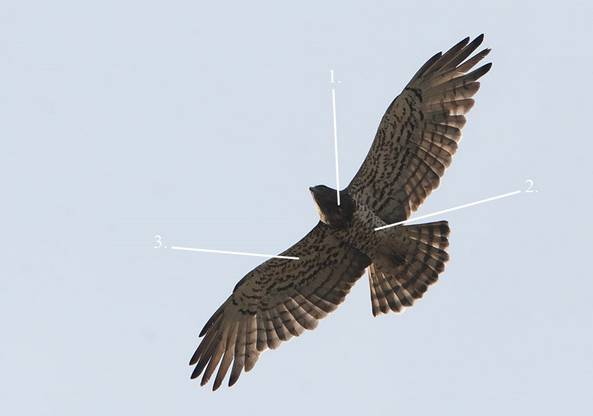 Characteristics of the female:
– well defined, strong hood, which is obvious especially early spring and autumn, when the moult of body feathers is suspended (1.)
– horizontal barring usually reaches the thighs, undertail coverts and stronger (compared to males) on those body parts where both sexes marked (2.)
– parallel dark lines of the underwing are stronger contributing to the overall darker underwing (3.). 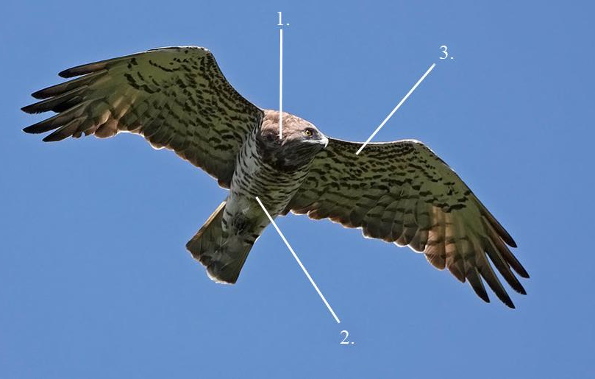