Ringing of Short-toed Eagles in Hungary

The program of ringing Short-toed Eagles is continuing in Hungary; 4 individuals were tagged this year:

3 chicks were ringed in the Zemplén Hills /map/ by István Béres (ringer), József Serfőző (climber), Zoltán Turny and Gábor Papp, nests were on Pinus sylvestris. Ring codes used: blue ring with white letters; A28, A29, A30.

1 chick was ringed in the Pilis Hills /map/ by Attila Feldhoffer (ringer), Vince Schwartz and Levente Kossuth (climber). There the pair has been nesting on oak (Quercus petraea). Ring code used: A41.

According to the Ringing Centre 83 Short-toed Eagles received rings up to date. Most of them were chicks tagged with aluminum rings in nests.

The very first observation came this year from the Hortobágy region on July 21. The bird was ringed in the Bükk Hills on July 20, 2014. Besides two observations of aluminium ringed individuals, and a recovery from Syria in 2000 (a bird ringed in 1993 in Tokaj, part of the Zemplén Hills and caught in Syria in 1997 during spring migration) this year’s colour-ringed observation was the first when the bird could be identified. According to recommendations of Gábor Papp, local nature photographers are taking pictures of Short-toed Eagles even from a great distance to be able to check a ring presence and for filling a kind of database of their individual appearances.

Colour-ringing of Short-toed Eagles in Hungary

This is just a small photo gallery of ringing Short-toed Eagle chicks in the Zemplén Mountains /map/. The juveniles were ringed by István Béres; the climber and the photographer was József Serfőző.

Gábor Papp reports that 4 eaglets were colour-ringed there this year and also ringing of 2 more was orginized by Zoltán Turny (MME/Birdlife) in Transdanubia /map/ and was done by rangers of Danube-Ipoly National Park at the following sites:
› Vértes – by Antal Klébert and István Staudinger; this is the 2nd year that the pair use this nest on an oak;
› the Budai Hills – by Bíró Sándor and Zoltán Turny; this is the 4th year in a row of breeding in this nest on a pine.

We offer you the summary (En) of the following article dedicated to sexing of Short-toed Eagle and Common Buzzard nestlings:

Photos of different aged Short-toed Eagle chicks are made by Jean-Pierre Malafosse and are published now by courtesy of the author. 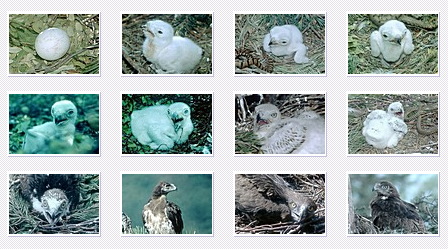 They can be helpful to researchers for estimated determination of the chicks’ age.