For 3 hours, the 24th March 2010, I am the witness of a specific behavior between a male and an intruding female. The scene takes place on a nest, two weeks before the laying-date. At first, the male “marks” his site ostensibly. An unknown female, interested by the nest appears … 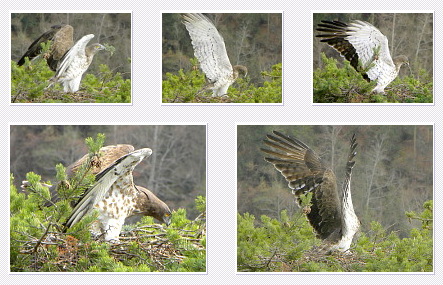 Please take a look at the map of main survey area /map/. General description and photos can be viewed below:

Two neighboring breeding sites with eyries 2100 m apart (but more than an hour on foot) in the heart of the Allier gorges, one of the most scenic spots of the Massif Central with a great biodiversity an no measures of protection. The area is a border of the massif of La Margeride and the Velay’s hight plateaux, on the margeridian slope. Here, the valley is 400 m deep with slopes of 60%. Generaly, those birds avoid meeting but some hunting grounds are shared that can cause agonistic behavior.

Breeding site LM: Woods of firs and beeches with some pines. In a cool open concavity on the left slope of the Allier valley. The nest sits on a pine, 250 m from a path. 69% incline. On a granitic formation. Very little human activity.

Breeding site SV: Because of the exposition, woods consist of oaks with some beeches and pines. Sometimes, gneissic outcrops cut through the forest. The nest is at the top of a pine, 75 m from a path. 55% incline. As the previous site, very few human activities (hunting in autumn and no regular forestry activities).

Nearest hunting ground: 100 ha of heath, growing after fires. No agricultural activities. Everywhere brooms, thick or sparse, with rocks in places, cliffs and bushes and few pines. The slopes are difficult of access for humans because of the vegetation, rocks and declivity, but very easy for snake eagles, with up-draughts (permitting hang-gliding and thermal soaring).

Please take a look at the map of main survey area /map/. General description and photos can be viewed below:

15 pairs are surveyed since 1996 in the west of department, on the slopes of the huge hercynian massif of Margeride. Very few human activities in valleys. None intensive agricultural practices on the boarding plateaux (cattle: cow, sheep). Birds nest in V-shaped valleys of the Allier and tributaries, between 700 and 950 m above sea level. Eyries generally on pines, sometimes on firs. Usually nest areas are quiet.
Diet is based on few species: Elaphe longissima (chiefly), Vipera aspis (often), Anguis fragilis (especially during cool and rainy periods), sometimes Coronella. Lizards: Lacerta viridis and Podarcis muralis.

Site 1. Breeding site: Nest on the left of the valley (yellow circle), on a pine. Other nests on the other side (green circle: fir now dead because of Ips and al.), and at the end of a valley’s branch (orange circle).
Altitude: 870 m. Exposition: SW. Breeding success rate: 0.66 (n=12).

Site 2. Breeding site: 2008’s is nest in yellow circle. On the border of an oakwood and a pinewood. Nest on a pine. Two other eyries are known, one of which in the green circle, in the concavity of the mountain.
Altitude: 760 m. Exposition: SSE. Breeding success rate: 0.45 (n=11). Bad rate because site at the crossroad of flight paths of other birds, for hunting areas.

Nearest hunting ground: Between the line of tall trees along a small brook (invisible), and the forest. At the foot of a slope. Sparse heath with few rocks.