A juvenile Short-toed Eagle was released after a month spent in the Rehabilitation Centre «Вільні Крила» (Free Wings) at the vicinity of Lviv /map/ (Western Ukraine) at the end of September.

For the last week, that eagle named Java has covered 330 km and reached Romania. The young short-toed tries to stick to areas potentially rich in snakes, such as numerous river floodplains. You can follow the eagle on the map of its migration which is daily updated.

That bird had been contused about two weeks after leaving the nest. Viktor Shelvinskyi and Pavlo Kruchok provided the best conditions to recover young Short-toed Eagle as quickly as possible. An installation of the Ecotone GPS-GSM transmitter was provided by Andrew Simon as a part of the project on Greater Spotted and Short-toed Snake Eagles in Northern Ukraine launched this year.

Ringing of Short-toed Eagles in Hungary

The program of ringing Short-toed Eagles is continuing in Hungary; 4 individuals were tagged this year:

3 chicks were ringed in the Zemplén Hills /map/ by István Béres (ringer), József Serfőző (climber), Zoltán Turny and Gábor Papp, nests were on Pinus sylvestris. Ring codes used: blue ring with white letters; A28, A29, A30.

1 chick was ringed in the Pilis Hills /map/ by Attila Feldhoffer (ringer), Vince Schwartz and Levente Kossuth (climber). There the pair has been nesting on oak (Quercus petraea). Ring code used: A41.

According to the Ringing Centre 83 Short-toed Eagles received rings up to date. Most of them were chicks tagged with aluminum rings in nests.

The very first observation came this year from the Hortobágy region on July 21. The bird was ringed in the Bükk Hills on July 20, 2014. Besides two observations of aluminium ringed individuals, and a recovery from Syria in 2000 (a bird ringed in 1993 in Tokaj, part of the Zemplén Hills and caught in Syria in 1997 during spring migration) this year’s colour-ringed observation was the first when the bird could be identified. According to recommendations of Gábor Papp, local nature photographers are taking pictures of Short-toed Eagles even from a great distance to be able to check a ring presence and for filling a kind of database of their individual appearances.

Colour-ringing of Short-toed Eagles in Hungary

This is just a small photo gallery of ringing Short-toed Eagle chicks in the Zemplén Mountains /map/. The juveniles were ringed by István Béres; the climber and the photographer was József Serfőző.

Gábor Papp reports that 4 eaglets were colour-ringed there this year and also ringing of 2 more was orginized by Zoltán Turny (MME/Birdlife) in Transdanubia /map/ and was done by rangers of Danube-Ipoly National Park at the following sites:
› Vértes – by Antal Klébert and István Staudinger; this is the 2nd year that the pair use this nest on an oak;
› the Budai Hills – by Bíró Sándor and Zoltán Turny; this is the 4th year in a row of breeding in this nest on a pine.

A story of life and death of one Short-toed Eagle ringed by Francesco Petretti in Western Central Italy /map/ in 1989 is represented below:

The eagle was born on the 18th of May 1989 in Tolfa Hills, 40 km north of Rome. The parental pair built the nest on a very large deciduous oak tree covered with ivy on the north facing slope of the hill, at 400 metres of altitude.

On the 27th of June 1989 P0845 reached the maximum weight of 1,800 grams, then the weight decreased, as it is usual among fledging eagles in the study area, and on the 17th of July, when the eagle left the nest, she weighed 1,680 grams. She was fitted with a backpack radio for ground telemetry and moved within the home range for a couple of months. Contact with her was lost on the 20th of September 1989, when the eagle probably left the area to reach the wintering ground in Africa.

On the 16th of September 2012 the body of P0845 was found dead at a distance of only 9 km from the ringing site. The body was brought to the Raptor Center in Vico Lake Nature Reserve, but death causes are unknown. P0845 was at least 23 years and 4 months old and I suppose this is a longevity record for the species. 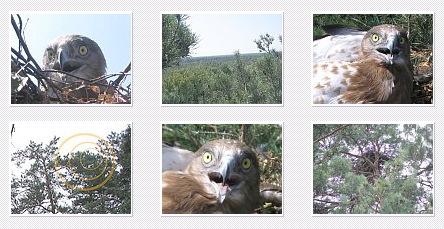