This bird had been photographed by Javier G. in Peñaflor (the environments of Zaragoza city, Spain) /map/ in August 2013. Thanks to the author and to Javier Blasco-Zumeta we have the following information about that unique record of leucism in Short-toed Snake Eagle:

That absolutely white bird was born in a forest of Aleppo pine (Pinus halepensis), successfully left the nest, was observed in its territory until the end of September, and when it was time to start the migration the juvenile Short-toed Eagle flew away.

If the bird has survived, its return to Europe may be expected next year, after 2 years of probable wintering and summering in Africa.

Please take a look at the map of the area. General botanical description and a photo can be viewed below:

La Retuerta is situated in the central part of the Ebro valley, east of Zaragoza, in northeastern Spain. The extreme climatic conditions of the area have produced a vegetation similar to that of the North-African steppes. This climate can be summarized as follows: large annual range of minimum and maximum temperatures, oscillating from -10 oC to more than +40 oC; frequent frost in spring; prevailing winds from the NW and the SE (cold and warm, respectively), both with great desiccating power; low annual rainfall (200-400 mm); water deficit over 300 mm.

END_OF_DOCUMENT_TOKEN_TO_BE_REPLACED

Heartful thanks to Javier Blasco-Zumeta for few fullsized illustrations to his information sheet! They are represented below: 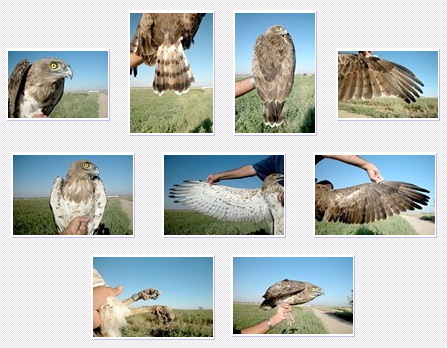 Moult and age of Short-toed Eagle

Visit please Javier Blasco-Zumeta’s site to find some information on identification of birds in nature. This information sheet –

(En) on two pages with demonstrative photos (moult and age-specific changes) – could be helpful in the field together with article of Guido Premuda and Andrea Corso about the plumage characters. Also we have the fullsized illustrations to view the plumage more particularly.