For the first time we present such weighty material as a 28 minutes film on the site. The video was made by Françoise Gérardin in Gironde /map/ in August, 2003 by digital video-camera from the special hiding-place at a distance of 23 metres from rather low situated Short-toed Eagle’s nest. Please read the introduction (En) written by the film’s author. Some single frames of the film are presented below. 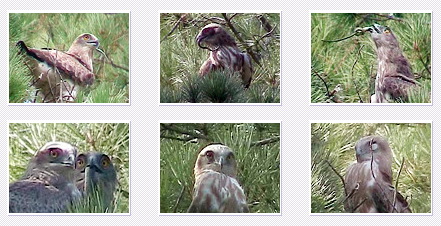 Besides, you can download the video (.avi) file and subtitles (Fr):
– Jean-le-Blanc au pays des sorcières. The subtitles (heartfelt thanks to Yves) can be used for the machine translation, if you need it.

This film was made in Gironde in France (near Bordeaux) in august 2003 during a scorching summer, in a “Pinus pinaster” forest. This tree is grown for industry. It was filmed in a very little hiding made of branches and ferns, twenty three meters from the tree where the nest was, nine meters from the ground. There I spent about eighty hours, that is to say four to six hours a day. The young short-toed eagle had just started flying and was fed on the nest until his departure for Africa at the end of September. In this great and moving experience I always try to be as discreet as possible and I’m grateful for those magic hours.

This entry was posted on Saturday, Apr 28, 2007 at 20:33 by Admin. You can follow any responses to this entry through the RSS 2.0 feed. You can leave a response, or trackback from your own site.

One Response to “Françoise Gérardin’s film, 2003”